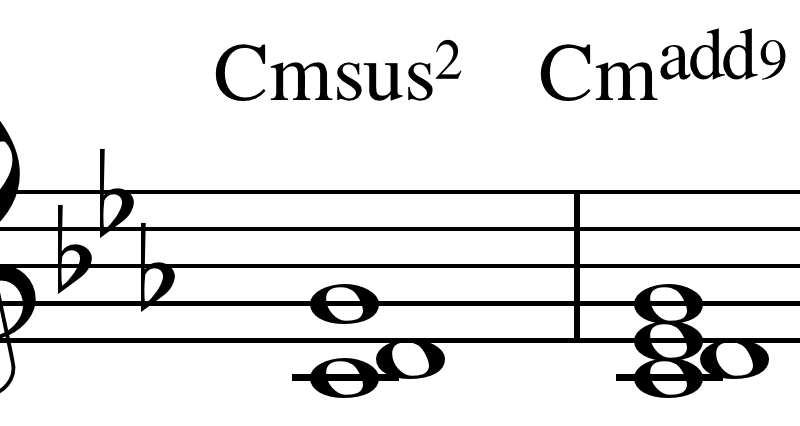 A suspended chord, or “sus chord”, is a chord in which the third has been displaced by either of its dissonant neighbouring notes, forming intervals of a major second or (more commonly), a perfect fourth with the root. This results in two distinct chord types: the suspended second (sus2) and the suspended fourth (sus4). The chords, Csus2 and Csus4 consist of the notes C D G and C F G, respectively.

Extended versions are also possible, such as the seventh suspended fourth, for example, which, with root C, contains the notes C F G Bb and is notated as C7 sus4.

The name suspended derives from an early voice leading technique developed during the common practice period of composition, in which an anticipated stepwise melodic progression to a harmonically stable note in any particular part (voice) was often momentarily delayed or suspended simply by extending the duration of the previous note. The resulting unexpected dissonance could then be all the more satisfyingly resolved by the eventual appearance of the displaced note.

In modern usage, without regard to such considerations of voice leading, the term suspended is restricted to those chords involving the displacement of the third only, and the dissonant second or fourth no longer needs to be prepared from the previous chord. Neither is it now obligatory for the displaced note to make an appearance at all; but in the majority of occurrences of suspended chords, the conventional stepwise resolution to the third is still observed.

In traditional music theory, the inclusion of the third in either the suspended second or suspended fourth chords negates the effect of suspension, and such chords are properly called added ninth and added eleventh chords rather than suspended chords.

A notable exception to this analysis of suspended chords occurs in jazz theory.
In post-bop and modal jazz compositions and improvisations, suspended seventh chords are often used in nontraditional ways. In these contexts, they often do not function as V chords, and do not resolve the fourth to the third; the lack of resolution gives the chord an ambiguous, static quality. Indeed, the third is often played on top of a sus4 chord; in jazz theory, this doesn’t negate the quality of the chord as a suspended chord.