In Western music, there are twelve pitches within each octave.

(The thirteenth note starts the next octave.) But in a tonal piece of music only seven of these notes, the seven notes of a major or minor scale, are used often. In a pentatonic scale, only five of the possible pitches within an octave are used. (So the scale will repeat starting at the sixth tone).

The most familiar pentatonic scales are used in much of the music of eastern Asia. You may be familiar with the scale below as the scale that is produced when you play all the “black keys” on a piano keyboard.

Listen to the black key pentatonic scale. Like other scales, this pentatonic scale is transposable; you can move the entire scale up or down by a half step or a major third or any interval you like. The scale will sound higher or lower, but other than that it will sound the same, because the pattern of intervals between the notes (half steps, whole steps, and minor thirds) is the same. (For more on intervals, see Half Steps and Whole Steps and Interval. For more on patterns of intervals within scales, see Major Scales and Minor Scales.) Now listen to a transposed pentatonic scale.

So there are quite a few different possible pentatonic scales that will produce a recognizably “unique sound”. Dividing the Octave, More or Less Any scale will list a certain number of notes within an octave. For major and minor scales, there are seven notes; for pentatonic, five; for a chromatic scale, twelve. Although some divisions are more common than others, any division can be imagined, and many are used in different musical traditions around the world.

For example, the classical music of India recognizes twenty-two different possible pitches within an octave; each raga uses five, six, or seven of these possible pitches. (Please see Indian Classical Music: Tuning and Ragas for more on this.) And there are some traditions in Africa that use six or eight notes within an octave. Listen to one possible eight-tone, or octatonic scale.

Blues scales are closely related to pentatonic scales. (Some versions are pentatonic.) Rearrange the pentatonic scale in figure 4 above so that it begins on the C, and add an F sharp in between the F and G, and you have a commonly used version of the blues scale. 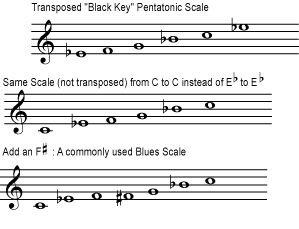 Many music traditions do not use scales. The most familiar of these to the Western listener are medieval chant and the classical music of India. In these and other modal traditions, the rules for constructing a piece of music are quite different than the rules for music that is based on a scale. Please see Modes and Ragas for more information.

There are many other scales that are not part of the major-minor system; these are often called exotic scales. Some, like pentatonic and octatonic scales, have fewer or more notes per octave, but many have seven tones, just as a major scale does. Some, like the whole tone scale, are invented by composers exploring new ideas; some, with names such as “Persian” and “Hungarian”, are based on the music of other cultures.

These may be borrowed from music that is essentially modal, but used as a scale in jazz and “world” music. If you want to compose or improvise music, you can experiment with making up new scales, unusual combinations of notes to be used in your music. Or you can look up some of the many exotic scales already in use. (Try a web search for “exotic scales”.) Here are just a few examples of the many possibilities. 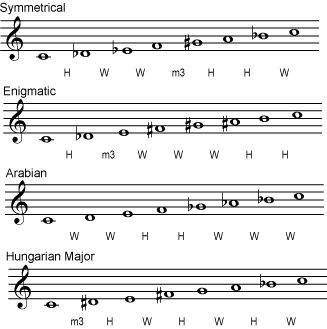 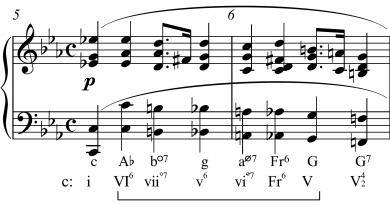