Here are basic concepts and terms needed to discuss melody and harmony. It is intended for teens or adults with no background in music theory but some familiarity with reading common notation and playing an instrument (or singing). Concepts covered include interval, major and minor keys and scales, triads and chords.

Some music theorists attempt to explain the compositional techniques composers use by establishing rules and patterns. Others model the experience of listening to or performing music. Though extremely diverse in their interests and commitments, many Western music theorists are united in their belief that the acts of composing, performing, and listening to music may be explicated to a high degree of detail (this, as opposed to a conception of musical expression as fundamentally ineffable except in musical sounds). 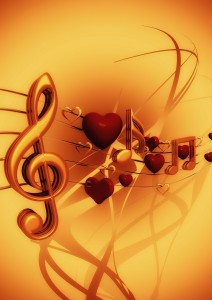 Generally, music theory works are both descriptive and prescriptive, that is they both attempt to define practice and to influence later practice. Thus, music theory generally lags behind practice in important ways, but also points towards future exploration and performance.

Rhythm is the arrangement of sounds in time. Meter animates time in regular pulse groupings, called measures (or bars ). The time signature or meter signature specifies how many beats are in a measure, and which value of written note is counted and felt as a single beat. Through increased stress and attack (and subtle variations in duration), particular tones may be accented. There are conventions in most musical traditions for a regular and hierarchical accentuation of beats to reinforce the meter. Syncopated rhythms are rhythms that accent unexpected parts of the beat. Playing simultaneous rhythms in more than one time signature is called polymeter.

Musical sounds are composed of pitch, duration, and timbre. Pitch is determined by the sound’s frequency of vibration, such as A440, which vibrates at 440 Hz. Pitches may be related by interval, their relative distance from a reference pitch. Tuning is the process of assigning pitches to notes. The difference in pitch between two notes is called an interval. The most basic interval is the Octave. That is when two notes are related in frequency in even intervals in multiples of two. For example, the note of A can be 110 Hz, 220 Hz, 440 Hz, 880 Hz… Notes, in turn, can be arranged into different scales and modes. In western music theory, the octave is divided into 12 notes, or half steps. Patterns of half and whole steps (2 half steps) make up a scale in that octave.

Music theory describes how sounds, which travel in waves, are notated, and how what is sounded, or played, is perceived by listeners. The study of how humans interpret sound is called psychoacoustics, while the cognitive aspects of how perceived sounds are interpreted into musical structures is studied in music cognition. In music, sound waves are usually measured not by wavelength or period, but by frequency.
Every object has a resonant frequency which is determined by the object’s composition. The different frequencies at which the sound producers of many instruments vibrate are given by the harmonic series.

A note is generally perceived as a sound on a single pitch. Notes have a regular wave beat on the eardrum that humans find pleasing. This may be in part due to the fact that from the moment the hearing function becomes available to an unborn child, there is the regular rhythm of the mother’s heartbeat.

Musical texture is the overall sound of a piece of music commonly described according to the number and relationship between parts or lines of music: monophony, heterophony, polyphony, homophony, or monody. The perceived texture of a piece may also be affected by the timbre of the instruments playing these parts and the harmony and rhythms used, among other things.

The most common scales are major, harmonic minor, melodic minor, and pentatonic. In music written using the system of major-minor tonality, the key of a piece determines the pitch level or frequency of each note. A piece in the key of D major will put all the notes two semitones higher than a piece in the key of C major.

Changing the key can dramatically change the feel of the piece of music, because it changes the relationship of the composition’s pitches to the pitch range of the instruments on which the piece is being performed. This often affects timbre as well as technical implications for the performers.

However, key changes may also go unrecognized by the listener, because changing the key does not change the relationship of the individual pitches to each other. Therefore, different keys can in many cases be considered equivalent and a matter of choice on the part of performers. This is especially true for popular and folk songs.

Music notation is the graphical representation of music. In standard Western notation, pitches are represented on the vertical axis and time is represented by notation symbols on the horizontal axis. Thus, notes are properly placed on the musical staff with appropriate time values to show musicians what note to play and when to play it. Such notation makes up the contents of the musical staff, along with directions indicating the key, tempo, dynamics…

Ear training, or aural skills, is a key skill learned in Music Theory. It is the ability to recognize pitches, scale progressions, and intervals. There are many uses for having a good ear, including finding the leading tone, melodic line, bass line, and key for pieces of music, leading to better sight reading or sight singing, and a stronger ability to improvise. The basic approach to beginning training with the ear is to play two pitches one after the other and be able to tell the interval between the two.

Common intervals are the Major Third, Perfect Fourth, Perfect Fifth, Major Sixth, and the Octave. One possible way to learn to recognize these intervals is to associate the sound with a commonly known song or pop culture sound. For example, Twinkle, Twinkle, Little Star starts with a rising Perfect Fifth interval; Francis Lai’s theme music for the film Love Story begins with a rising and falling Minor Sixth; a Major Sixth can be associated with the NBC jingle or the song My Bonnie Lies over the Ocean; and Somewhere Over the Rainbow commences with a rising Octave.

Disclaimer: Part of the text is available under the terms of the GNU Free Documentation License