The clef symbol on a musical staff tells you which pitches belong on the lines and spaces of that staff.

The first symbol that appears at the beginning of every music staff is a clef symbol. It is very important because it tells you which note (A, B, C, D, E, F, or G) is found on each line or space. For example, a treble clef symbol tells you that the second line from the bottom is “G”. The other notes are arranged on the staff so that the next letter is always on the next higher line or space. The last note letter, G, is always followed by another A.

A bass clef symbol, on the other hand, tells you that the second line from the top is F. The notes are still arranged in ascending order, but they are all in different places than they were in treble clef.

One of the first steps in learning to read music in a particular clef is memorizing where the notes are. Many students prefer to memorize the notes and spaces separately. Here are some of the most popular mnemonics used. 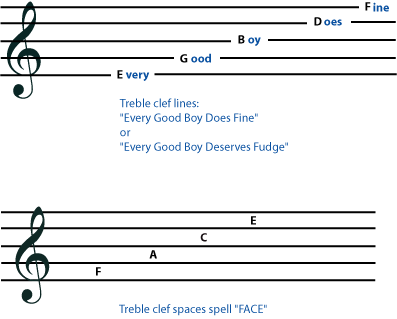 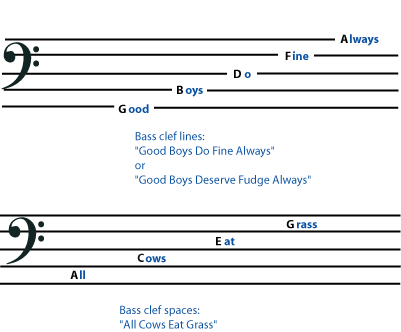 You can use a word or silly sentence to help you memorize which notes belong on the lines or spaces of a clef.

Most music these days is written in either bass clef or treble clef, but some music is written in a C clef. The C clef is moveable: whatever line it centers on is a C. C Clefs

All of the notes on this staff are middle C.

The bass and treble clefs were also once moveable, but it is now very rare to see them anywhere but in their standard positions. If you do see a treble or bass clef symbol in an unusual place, remember: treble clef is a G clef; its spiral curls around a G. Bass clef is an F clef; its two dots center around an F.

It is rare these days to see the G and F clefs in these nonstandard positions.

A small “8” at the bottom of a treble clef means that the notes should sound one octave lower than written.

Why use different clefs?

Music is easier to read and write if most of the notes fall on the staff and few ledger lines have to be used.

These scores show the same notes written in treble and in bass clef. The staff with fewer ledger lines is easier to read and write.

Middle C is above the bass clef and below the treble clef; so together these two clefs cover most of the range of most voices and instruments.

Here is a printable worksheet that you can use to help you memorize the notes in your clef. 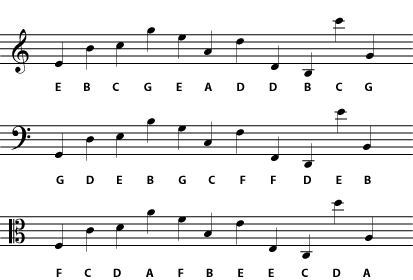