An introduction to chord relationships within a particular key.

It sounds like a very technical idea, but basic harmonic analysis just means understanding how a chord is related to the key and to the other chords in a piece of music. This can be such useful information that you will find many musicians who have not studied much music theory, and even some who don’t read music, but who can tell you what the “I” or the “V” chord are in a certain key. Why is it useful to know how chords are related? Many standard forms (for example, the “twelve bar blues”) follow very specific chord progressions. If you know the chord relationships, you can play any progression in any key. If you are searching for chords to go with a particular melody (in a particular key), it is also very helpful to know what chords are most likely in that key, and how they might be likely to progress from one to another.

Any chord might show up in any key, but some chords are much more likely than others. The most likely chords to show up in a key are the chords that use only the notes in that key (no accidentals). So these chords have both names and numbers that tell how they fit into the key. (We’ll just talk about basic triads for the moment, not sevenths or other added-note chords). The chords are numbered using Roman numerals from I to vii.

The chords of C major and D major keys 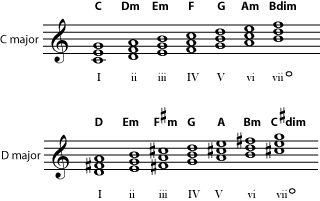 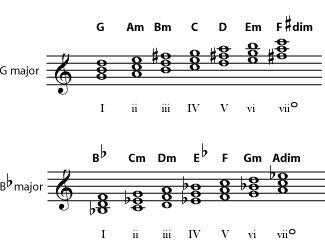 Note: Notice that IV in the key of B flat is an E flat major chord, not an E major chord, and vii in the key of G is F sharp diminished, not F diminished. If you can’t name the scale notes in a key, you may find it difficult to predict whether a chord should be based on a sharp, flat, or natural note. If you read music, learn your scales; they are very useful for many different reasons. If you don’t read music, and are not planning to learn, you may find it easiest to simply memorize the most important chords (at least I, IV, and V) in your favorite keys.

A Hierarchy of Chords

Even among the chords that naturally occur in a key signature, some are much more likely to be used than others. In most music, the most common chord is I. In Western music, I is the tonal center of the music, the chord that feels like the “home base” of the music. As the other two major chords in the key, IV and V are also likely to be very common. In fact, the most common added-note chord in most Western music is V with a seventh added (V7). Whereas the I chord feels most strongly “at home”, V7 gives the strongest feeling of “time to head home now”. This is very useful for giving music a satisfying ending. Listen to some chords in the key of C and see how strongly each suggests that you must be in the key of C: C (major) chord (I);
F chord – C chord (IV – I); G chord – C chord (V – I); G seventh chord – C chord
(V7 – I) (Please see Cadence for more on this subject.) Many folk songs and
other simple tunes can be accompanied using only the I, IV and V (or V7) chords
of a key, a fact greatly appreciated by many beginning guitar players. Look at
some chord progressions from real music. 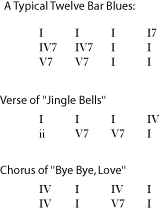 Much Western music is harmonically pretty simple, so it can be very useful just to know I, IV, and V in your favorite keys. A lot of folk music, blues, rock, marches, and even some classical music is based on simple chord progressions, but of course there is plenty of music that has more complicated harmonies. Pop and jazz in particular often include lots of added-note chords (for example Dsus4 or E11). Classical music can also include more complex chords, and is also more likely to use chords that are not in the key. Study and practice is needed to be able to identify and understand these more complex progressions. Some more chord progressions 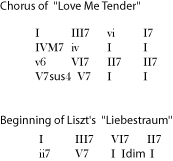 Some music has more complicated harmonies, such as sevenths and other added-note chords, or chords that include accidentals, such as I diminished and II (major).

Naming music Chords Within a Key 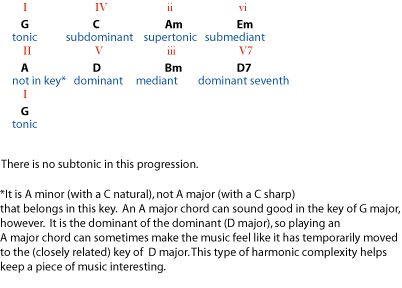 Sometimes a piece of music moves into a new key. This is called modulation. It is very common in traditional classical music; long symphony and concerto movements almost always spend at least some time in a different key (usually a closely related key such as the dominant or the relative minor) to keep things interesting. It is more difficult to work modulations into shorter pieces, since a chord progression that gives a pleasant modulation usually takes a while. But if you find that the chords in a piece of music suddenly become much different, it may be that the piece has modulated. (If you have a written melody, look for lots of accidentals or even an actual change of key signature.) The new key may be a related key, but another favorite trick in popular music is to simply move the key up one whole step, for example from C major to D major.